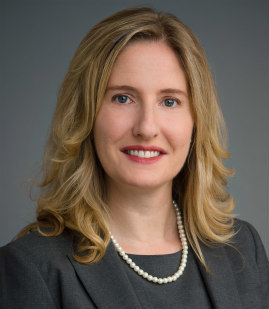 Eleanor M. Lackman is a nationally recognized practitioner in IP, media, and entertainment law. Her practice encompasses media and entertainment defense, copyright and trademark litigation and counseling, and trademark branding, prosecution, and licensing. She is a skilled advocate, having successfully argued and won multiple high-profile federal appeals, preliminary injunction motions, and other motions on the merits, in addition to repeatedly securing victories as lead trial counsel. The media and entertainment industries routinely call on her to draft amicus briefs in the most closely watched cases in the country, while major brand owners in a wide range of industries entrust her with their branding, counseling, licensing, prosecution, and enforcement needs.

From developing creative, cost-effective strategies in litigating and resolving disputes, to advocating for and ensuring diversity in the firm and in the legal profession, forward-thinking clients trust Eleanor to work closely with the business to achieve their goals while strongly advocating for them in the courts, the U.S. Patent & Trademark Office, and arbitral bodies to procure successful results. As part of her commitment to the media, entertainment, sports, and technology industries, Eleanor splits her time between MSK’s offices in New York and California, and she is admitted to practice in both states.

She is also very active in the legal bar. Eleanor has served as co-chair of the largest chapter of the Copyright Society of the USA (CSUSA) and is presently serving her second term with the organization as a trustee. Among her frequent speaking engagements and publications, she has given annual IP licensing presentations at the Practising Law Institute (PLI) for more than a decade and for several years has authored continuously maintained practice notes on copyright and trademark injunctions with Practical Law Company. Eleanor has served consecutive terms with the International Trademark Association’s Internet and International Amicus Committees, sits on the Copyright Alliance’s Amicus Committee, is a part of the Board of Advisors to Fordham’s Center on Law and Information Policy, and has been a member of the National Academy of Recording Arts & Sciences for over 15 years.