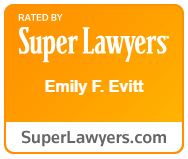 Emily was exposed to the law at an early age, adding “helpful” notations (in crayon) to her parents’ copy of Black’s Law Dictionary.  But it was not until college, when she took a class called Computers and the Law, that she discovered her passion for intellectual property and realized that technology is always moving faster than the law.  In her practice, Emily relishes the challenge of applying old rules to new technology.

Over the course of her career, Emily has also developed experience in other areas of law that are more (and less) related to media and entertainment.  Besides the usual suspects of idea submission, right of publicity, and defamation, she has unique expertise in California free speech law – particularly protecting private property owners’ rights.

Emily is an experienced intellectual property litigator who works with film and television studios, record companies, music publishing companies, video game companies, and other major online content providers.  She defends her clients against copyright and trademark infringement allegations, and also brings actions to enforce their rights.

In addition to copyright and trademark, Emily also practices in related areas of law relevant to her entertainment and technology clients, such as idea submission/breach of implied contract, right of publicity, First Amendment, and defamation, including California’s “anti-SLAPP” statute.

Many of Emily’s clients rely on online distribution of their content or are faced with threats of Internet piracy.  Emily protects clients from online theft of their copyrighted content and “cybersquatting” on their trademarks.  Emily is well-versed in the Digital Millennium Copyright Act (“DMCA”) and the Communications Decency Act (“CDA”).

Emily is also very experienced with California's free speech law, and its interplay with private property rights.  She has successfully defended against protestors’ demands to demonstrate on her clients’ land.