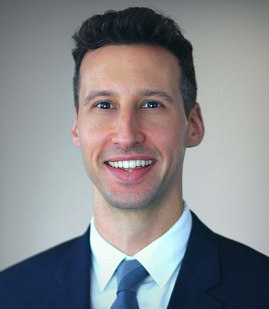 Eighth row up, middle seat, peanut M&Ms in the left cup holder, popcorn in the right. As the theater lights dim, Stephen’s heart begins to race. The screen illuminates from black as he transports into a fantastical new world. Watching life-like dinosaurs roam the fantasy island in the 1993 epic movie Jurassic Park, Stephen got his first glimpse in to the escapism offered by Hollywood.

Growing up in a small town in New York, Stephen was always enthralled with the innovation and creativity that burgeons from Hollywood. The lights, cameras, and movie stars offered an escape from everyday life and a chance to partake in a different world. As a child, Stephen knew he wanted to eventually migrate west and immerse himself in Hollywood, which he accomplished by attending USC’s law school.

What Stephen didn’t realize initially was that his passion for Hollywood and movie-making would land him on the immigration team at MSK. Some of the entertainment industries greatest on-screen accomplishments are driven by behind-the-scenes talent who require immigration petitions to get their jobs done. Now, whenever Stephen sits in a dark theater and the lights come up from black he feels connected to the industry he has long admired.

Stephen Blaker has a well developed immigration practice that is dedicated to handling employment- and family-based nonimmigrant and immigrant petitions for a multitude of industries. Stephen works with employers and individuals on employment-based matters such as H-1B, TN, L-1A/B (including Blanket petitions), E-2, E-3, O-1, J-1, I-140 (Extraordinary Ability, Multinational Manager, and labor certification-based), Adjustment of Status and Naturalization applications. His broad landscape of clients include multinational media/advertising companies, the health and pharmacology industry, software and technology distributors, real estate companies, and nonprofits. Stephen has also worked with the financial service industry and multiple emerging growth companies.

Stephen recognizes his clients depend on him to thoroughly understand and navigate the many intricacies of U.S. immigration. It is with this understanding that Stephen continues to build and expand his practice, offering insightful counsel to individuals of all walks of life, no matter where their journey leads.