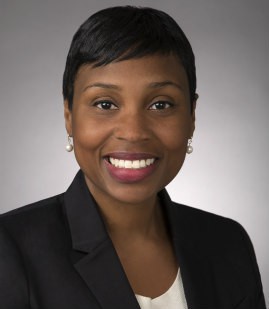 Alesha Dominique spent a year in the Bronx teaching 8th grade after graduating from Howard University, and then a year in Southwest Chicago, with Teach for America. Those two years she spent teaching math to some of the most underprivileged and underserved youth in America was as transformative as it was defining for Alesha’s life. The kids she taught would sometimes be found doing homework at night on a street corner under a street light because it was the only light available to them…..their homes sitting in darkness because the electricity had been cut off.

When Alesha arrived on the first day of school in the Bronx, one of the students commented to her that she wouldn’t last a week. When Alesha asked the student why she thought that, the response was “because we had 4 teachers come in and out of here last school year….no one can handle us….no one lasts for long.” Alesha took that as a challenge and not only lasted the entire school year but got results from her students. When she arrived only 20% had scored proficient or above in their previous 7th grade New York State math test scores. By the end of the 8th grade year 70% of that same group of students scored proficient or above on their 8th grade test scores.

On a recent Tuesday evening Alesha’s cell phone rang. A familiar voice at the other end of the phone said “hey Ms. Alesha, how are you?” The voice belonged to one of Alesha’s favorite former students during her time with the 8th grade class in the Bronx. She consistently receives phone calls from former students looking for advice about life and just “checking in”. It’s that lifeline to her former students that has prevented Alesha from changing her New York-based cell phone number over a decade later.